Patricia Urquiola was born in Oviedo in Spain and studied architecture at the Universidad Politécnica de Madrid. She moved to Milan to finish her studies at the Politecnico di Milano, where she graduated in 1989 with Achille Castiglioni . She works with Vico Magistretti and later as head of Design for Lissoni Associati.

Among his most significant architectural projects is the Mandarin Oriental Hotel in Barcelona, ​​ Das Stue Hotel in Berlin, the spa of the Four Seasons Hotel in Milan, Room Mate Giulia Hotel in Milan and Il Sereno Hotel in Como; showrooms and installations for Cassina, Gianvito Rossi, BMW, Missoni, Moroso, Molteni, Officine Panerai, H&M and Santoni .

Some of its products are exhibited in major international art and design museums including the MoMA in New York, the Musée des Arts Decoratifs In Paris, the Museum of Design in Munich, the Vitra Design Museum in Basel, the Stedelijk in Amsterdam, The Design Museum and the Victoria & Albert Museum in London.

Patricia Urquiola has been a guest lecturer at various universities such as Bocconi University, Domus Academy, Harvard University, the Philadelphia Museum of Art and at the Politecnico di Milano of which she is a member. She is a member of the Scientific Committee of the Fondazione Museo Del Design and was Ambassador of the Milan Expo in 2015.

She received the Gold Medal of Merit in Fine Arts from the Spanish Government and the Cross of Isabella the Catholic.

Patricia Urquiola has been Cassina's Art Director since September 2015.

Here are some of his products:

Designed for Glas Italia, Bisel is a collection of tables and consoles of various heights. They are made of a material composed of multi-layered and multi-colored glass - in turn created by laminating five sheets of 5mm extra-clear glass, each with a different colored film. The multilayer glass comes in different shapes (polished polished and faceted), by means of unique bevels accentuated by the transparency of the glass. Bisel pieces interact with light in an enchanting and changing way, depending on the incidence of light on the surfaces. The different components are welded together in total transparency, thanks to a special gluing technique, creating a precious collection of furnishing jewels.

Felt, a natural, warm and malleable material, was the starting point for the design of Nuances rugs. The intention was to reinvent traditional processing, with a technique that allowed the recycling of discarded felt fibers. This has resulted in the fusion of different colors and densities of materials, resulting in a new stone-like appearance. This collection for GAN consists of three rugs with different motifs (Curve, Line and Round) and a pouf, which can be combined in an infinite variety of architectural geometries.Three color sequences, starting from stone gray, develop into natural color palettes: pink and burgundy (Burgundy), green and blue (Naiade) and earth and lava (Vulcano). The shades flow, as the name indicates: the lines open and close, the colors fade and focus on a visual and tactile game, which transforms the collection into a deliberately sensorial and artistic experience. Each piece of Nuances is entirely hand-sewn.

Designed for Glas Italia, the L.A. Sunset are low and round tables with tubular metal structure available in pearl night blue or copper with matt metallic finish. The laminated glass top, with mirror or opal effect, becomes a palette of colors, merging with each other, like gas or fluids, with the final effect of masking the solid state of the material.

A set of high and low oval-shaped tables, Liquefy for Glas Italia has combined the transparent fluidity of glass with the elegant veins of marble. The extra-clear tempered glass contrasts with the faded and irregular decoration. A surprising image, an ever-changing effect make the appearance of the veins dynamic and variable, depending on the point of view. Available in two different colors, with green or brown shades. The decoration is enclosed in a color-coordinated frame, painted on the glass perimeter.

The Spanish word for sleeves, Mangas is a collection of rugs and poufs based on a patchwork of different wool sweaters. This GAN project comes in a variety of different types and shapes, from Manga Corta (short sleeve) to Manga de Campana (a traditional bell sleeve).

The starting point of the collection is inspired by the look of hand-woven sweaters. The Mangas Original revolutionized the carpet industry with their first three-dimensional form, a surprising series of rugs, together with the ottomans that complete the collection, characterized by a diversity of shades and a rich variety of textures and colors. Antoni Arola is the designer of the Palma and Flamingo collection for Vibia. His projects touch the most disparate... Born in Vicenza, his activity in Industrial Design started in 1990 collaborating also as an art director with... 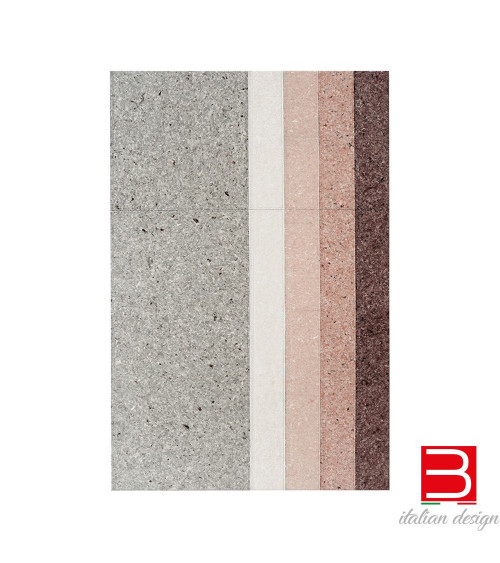